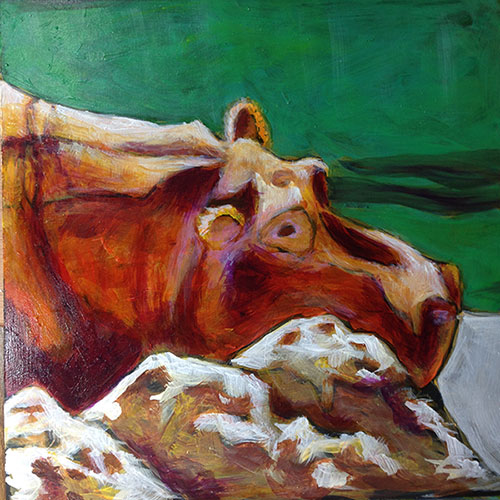 Did you know that Florida has a state hippo? It’s true. His name is Lu, formerly known as Lucifer, but in my painting he’s a she named Lucy. Doesn’t she look like a Lucy? A sunbathing beauty named Lucy?

Lucy “Lu” will turn 57 in January. He was born at the San Diego zoo in 1960 and was a TV and movie star in the 60s. When the animal troupe that owned him sold their park to the state of Florida, Lu was part of the deal. Lu was granted Florida citizenship so he could stay at the park that now housed only native species.

The park, called Homosassa Springs State Park, is home to a crystal clear, always warm spring and river. The water is the winter home of many West Indian manatees as well as other native Floridians like alligators, black bears, and flamingos. And of course, a hippo named Lu.